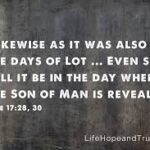 (29) But the same day that Lot went out of Sodom it rained fire and brimstone from heaven, and destroyed them all.

I know that most people on the earth don’t believe the Bible is truth. But the people in Sodom never even dreamed that God would wipe them all away in the snap of the fingers. But they were gone that quick when God had enough. So it will be with the people in America. God is patient and long suffering, willing to forgive and forget. But in His word He tells us, Genesis 6: 3

Then after many years He decided that His patience had reached an end. Many had laughed at Noah but in the end God closed the door to the ark and but eight souls were instantly gone!. 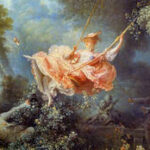 The days predicted here are certainly at the door of America. Blessest beyond any nation before us and now the capital of sin and debauchery. It is proudly celebrated daily when only a few years ago. Americans would at least try to mask it and hide the reality from view! But again God has given a clear warning!

(48) But he that knew not, and did commit things worthy of stripes, shall be beaten with few stripes. For unto whomsoever much is given, of him shall be much required: and to whom men have committed much, of him they will ask the more. 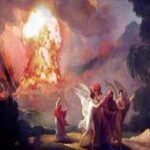 Now even our very government is saturated to the core with everyday practices that show their hatred for anything near to the values of Godly people! Hating God and anyone who loves Him is seen everywhere we look. But God will not be fooled by what is clearly a creeping but steady move forward with an evil plan to take over all of the creation that He and He alone set in place. Look carefully at what God says here in Matthews gospel.

God Himself decided thousands of years ago that a day would come when He could be patient no longer. The events we read about in the book of Revelation were foretold in Daniel, Jeremiah and numerous other places. Yet the foolish are about to bring an end to the patience of God. Come quickly Lord Jesus!!!