The World Stage Is Set! 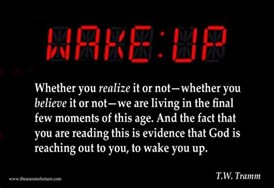 God is the director of what we might call “The End Times”. It will be the most dynamic production that humanity has ever seen. The evil actors have taken their places and Lucifer is prepared to move against the God of the universe! Yes, the evil believe they are running the show. Even Lucifer believes he will now set his throne above the most high. But God predicted the whole thing and declared the end from the beginning! It really says a lot about evil who have seen the words of almighty God. Predicting exactly what would happen at the end of the Church Age and they are doing exactly what God predicted anyway! Their arrogance will usher them directly into their catastrophic downfall. Most are just following their arrogant leaders. Many will defy God even after they realize it is all folly! Which side of the issues are you on? 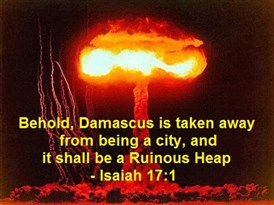 (1) The burden of Damascus. Behold, Damascus is taken away from being a city, and it shall be a ruinous heap.

We the people will never change prophesy, we can only fulfill it! Look where we are at people! The Lord Jesus will be coming for His church any day. For those that don’t believe the Rapture will happen. They are deceived but if God decides to let them go into the tribulation because they wouldn’t believe the truth. Just like the Jews who wouldn’t believe in Jesus. God may decide that they will go into the tribulation and taste of His wrath. God forbid that this should happen but have thy will oh Lord! God has gone the extra mile to prepare man for the end times and yet many of us will not heed His words and just obey Him! The treaties Russia has with Iran will cause them to be pulled in and the rest will happen as the Bible for told.

When the destruction of Damascus happens it will draw the nations to the Middle East as it was prophesied in the book of Ezekiel. Chapters thirty eight and 39. Here is an excerpt from the beginning of the prophecy!

(1) And the word of the LORD came unto me, saying,

(2) Son of man, set thy face against Gog, the land of Magog, the chief prince of Meshech and Tubal, and prophesy against him,

(3) And say, Thus saith the Lord GOD; Behold, I am against thee, O Gog, the chief prince of Meshech and Tubal:

(4) And I will turn thee back, and put hooks into thy jaws, and I will bring thee forth, and all thine army, horses and horsemen, all of them clothed with all sorts of armour, even a great company with bucklers and shields, all of them handling swords:

(5) Persia, Ethiopia, and Libya with them; all of them with shield and helmet:

(7) Be thou prepared, and prepare for thyself, thou, and all thy company that are assembled unto thee, and be thou a guard unto them.

(8) After many days thou shalt be visited: in the latter years thou shalt come into the land that is brought back from the sword, and is gathered out of many people, against the mountains of Israel, which have been always waste: but it is brought forth out of the nations, and they shall dwell safely all of them.

The morals of most people in the world will not allow them to consider following the teachings of Jesus. Certainly He knew that would be the case at the end of the church age.

2nd Thessalonians 2: 1 thru 13
(1) Now we beseech you, brethren, by the coming of our Lord Jesus Christ, and by our gathering together unto him,
(2) That ye be not soon shaken in mind, or be troubled, neither by spirit, nor by word, nor by letter as from us, as that the day of Christ is at hand.
(3) Let no man deceive you by any means: for that day shall not come, except there come a falling away first, and that man of sin be revealed, the son of perdition;
(4) Who opposeth and exalteth himself above all that is called God, or that is worshipped; so that he as God sitteth in the temple of God, shewing himself that he is God.
(5) Remember ye not, that, when I was yet with you, I told you these things?
(6) And now ye know what withholdeth that he might be revealed in his time.
(7) For the mystery of iniquity doth already work: only he who now letteth will let, until he be taken out of the way.
(8) And then shall that Wicked be revealed, whom the Lord shall consume with the spirit of his mouth, and shall destroy with the brightness of his coming:
(9) Even him, whose coming is after the working of Satan with all power and signs and lying wonders,
(10) And with all deceivableness of unrighteousness in them that perish; because they received not the love of the truth, that they might be saved.
(11) And for this cause God shall send them strong delusion, that they should believe a lie:
(12) That they all might be damned who believed not the truth, but had pleasure in unrighteousness.
(13) But we are bound to give thanks alway to God for you, brethren beloved of the Lord, because God hath from the beginning chosen you to salvation through sanctification of the Spirit and belief of the truth: 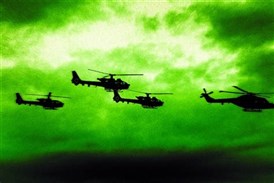 Yes, if we take a look around we see that all the players are now in place for the final events of mans effort to rule himself. It is very clear that we have chosen the most evil among us to run our governments. All most every conservative leader has been removed from power. In almost every case those in power are the ones who have never had to work an honest job in their lives! Certainly wise politicians have promised free stuff and the gullible have ate it up. Look at the degenerate in the White house in 2021. But it was essential to get someone into that power spot to make it possible for the bad actors in the Middle East to move just as God predicted they would. We are about to see the most violent time throughout the world that has ever been or will ever be! 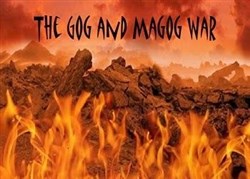 If you have been keeping up with things as a good Christian you will notice that America is not standing shoulder to shoulder with Israel. That will not come as a surprise to you if you study the Bible and the news, especially news out of the middle east. Both America and Israel are lacking a walk with the Lord! I believe with all that is in me that Mystery Babylon is located in America. We will not go into all of my reasons for coming to that conclusion at this time. That actually involves much study and a broad understanding of what signs are right under the nose of Americans. Plus an in depth understanding of the Bible! A good source of information is a Christian author named L.A. Marzulli! His website: https://lamarzulli.net/ will give you access to information that would take you a lifetime to discover otherwise1

Anyone who could hate someone just because they were willing to die for them can’t be anyone I would want to trust as a friend!

Now comes a time of famine, hardship and death like we have never seen! But if you have accepted Jesus as your Lord you will be taken out until the very end. Then you and I will come back with Him to take control. To reign with Jesus! Yes the stage is set and it will happen just as the word of God said it would!