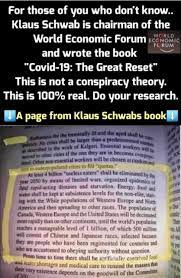 The guy who wants to sell you “The Great Reset or the Christian who is giving you free information”! The last one is me and I don’t want your money or any of your possessions. The people we elected to speak for us, who we pay quite handsomely I might add. Yet they have lied too get elected and then lied again when the took their oath! That if you are paying attention was the one that is spoken of in the Holy Bible.

(44) Ye are of your father the devil, and the lusts of your father ye will do. He was a murderer from the beginning, and abode not in the truth, because there is no truth in him. When he speaketh a lie, he speaketh of his own: for he is a liar, and the father of it.

(45) And because I tell you the truth, ye believe me not.

(46) Which of you convinceth me of sin? And if I say the truth, why do ye not believe me? 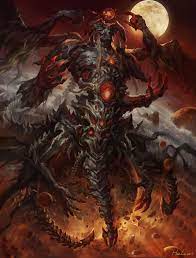 They are everywhere and they are determined to take us all to hell with them! If you are paying attention you know where we are in the Bible today. If you aren’t sure then you aren’t a Christian! The way you vote makes it clear what kind of person you are. The people who are serving in the governments of the world didn’t get there by accident. They were put there by like minded people! You vote for the people you believe think as you do. The governments of the entire world are sick in their minds and can’t see how sick their minds are because they don’t want to see. They enjoy being wicked and have made evil doing the bedrock of who they are! Jesus told us what it would be like in the day in which we are living.

The hour is very late and those who are choosing not to accept the pardon that Jesus bought for them at the cross are making a huge mistake! No God sends no one too hell. He sent His son too the cross too pay our sin debt. If we choose too not be pardoned that is entirely our own decision! There are many people who can’t seem to see that God is not the foolish or selfish one here. If you take a serious look at the offer God has laid out for everyone who was ever born. All He has asked in return for you accept His offer is laid out in the answer gave when asked this question!

What is the most important commandment?

(34) But when the Pharisees had heard that he had put the Sadducees to silence, they were gathered together.

(35) Then one of them, which was a lawyer, asked him a question, tempting him, and saying,

(36) Master, which is the great commandment in the law?

(38) This is the first and great commandment.

(39) And the second is like unto it, Thou shalt love thy neighbour as thyself.

(40) On these two commandments hang all the law and the prophets.

Why would anyone object to that? It would seem too me that the only person that would have to think twice would be someone who was wicked in their heart and knew it! 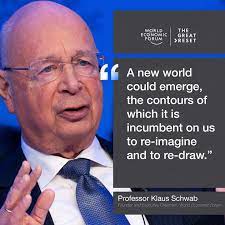 But lets take another look at the people promoting “The Great Reset”! It is really easy to see that they would have a reason to reject Gods offer. They wouldn’t be able to put together a plan to rob, rape and murder hundreds of millions of people if they accepted the plan God is offering to all of humanity! But why would any of the people that are not part of their group want to join them in rejecting Gods generous offer? What we see today in the USA and Globally is organized crime at it’s most flagrant!

The criminals throughout the entire world have joined hands and openly made it clear that they intend to commit murder, fraud, and crimes against the working class of the world. No type of crime is left out of their plan. The statement that they have made is all inclusive no matter how you look at it. You will own nothing and be happy! They have even declared that we will eat bugs. How are they going to try to sell this way of life to a sane population. Actually they have already started their campaign and it’s called Climate Change!

Yes and sadly the people of most countries of the world would have already taken too the streets With pitch forks, ropes and tar if they had acted as our forefathers would have! But thanks to school systems of the past fifty to one hundred years. Dumbing-down our children while we watch tv and play with our smart phones! The criminals now believe we don’t have the guts to stand up and say oh hell no you won’t! Unfortunately they have read the population exactly right and it was predicted thousands of years ago.

If you are a Bible student you already know that God is the creator and told us of climate change.

(27) Behold, the name of the LORD cometh from far, burning with his anger, and the burden thereof is heavy: his lips are full of indignation, and his tongue as a devouring fire:

(28) And his breath, as an overflowing stream, shall reach to the midst of the neck, to sift the nations with the sieve of vanity: and there shall be a bridle in the jaws of the people, causing them to err.

(29) Ye shall have a song, as in the night when a holy solemnity is kept; and gladness of heart, as when one goeth with a pipe to come into the mountain of the LORD, to the mighty One of Israel.

(30) And the LORD shall cause his glorious voice to be heard, and shall shew the lighting down of his arm, with the indignation of his anger, and with the flame of a devouring fire, with scattering, and tempest, and hailstones.

(7) But the heavens and the earth, which are now, by the same word are kept in store, reserved unto fire against the day of judgment and perdition of ungodly men.

(9) The Lord is not slack concerning his promise, as some men count slackness; but is longsuffering to us-ward, not willing that any should perish, but that all should come to repentance.

(10) But the day of the Lord will come as a thief in the night; in the which the heavens shall pass away with a great noise, and the elements shall melt with fervent heat, the earth also and the works that are therein shall be burned up.

(8) And the fourth angel poured out his vial upon the sun; and power was given unto him to scorch men with fire.

(9) And men were scorched with great heat, and blasphemed the name of God, which hath power over these plagues: and they repented not to give him glory.

(10) And the fifth angel poured out his vial upon the seat of the beast; and his kingdom was full of darkness; and they gnawed their tongues for pain,

(11) And blasphemed the God of heaven because of their pains and their sores, and repented not of their deeds. 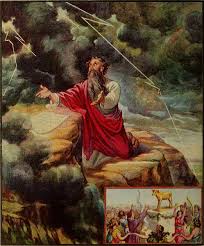 So those who presume too overthrow the creator God are telling you that what is happening is caused by man. They are correct in that part of their story however they fail too tell you. It is them who is causing all of this. It has nothing too do with the car or truck you drive. Or the cow standing out in the field passing gas. The people lying too you are the criminals who plan too steal all you have worked for in your lives! All of this laid out for you in the Holy Bible thousands of years ago when cars and trucks didn’t even exist!

So are the globalists correct to believe you are stupid enough to believe that you are the one causing all of the problems that the world faces today. Follow them and I promise you will go into hell with them very soon. God has had enough of them telling Him too get out of His creation and just as He promised thousands of years ago. Those who accept Him as their King will go into the Kingdom of God and those who reject Him will meet judgment. Don’t believe the ones who will tell you that they know how too escape the judgment seat of God. They have an appointment with God and He will not be deny-ed, He provides the transportation! He gave them the same opportunity to be forgiven that He gave you and they chose too go to hell. What does that tell you about how bright they are?

Accept the pardon God has offered too you today!