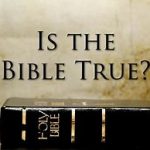 If the Bible isn’t true, I have lost nothing. But the prophecies of the end of the Church Age are being fulfilled daily. Look around you, are we not headed for one world government. This was predicted in the distant past, right down to the last details. God knew from the foundation of the world that the evil among us would never stop trying to enslave the entire globe.

There are countries all over the globe that the evil could move to. Already demonstrating how to live in a slave society. Yet they always gravitate to the free societies and then set out to change it to be like the sewer they left. They cannot stand to see a person anywhere on the globe living free! Especially if that person or persons are Christians. Remember Jesus said: “They hated me and they will hate you!” This is prophecy being fulfilled today and we see it everywhere.

God knew what the nature of humans would be from the very beginning. He created them and has given them thousands of years to prove that they can’t govern themselves! The long term will always show that the selfish will always seek to dominate the unselfish. Further for each good and decent person that is born. Ninety nine who believe they should be in charge, will be born. The evil multiply like rabbits and never cease to believe that they are smarter than you. The person who can be easily dominated is their target! 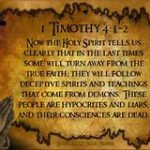 Throughout history there has always been those with really have big egos. They believe that they are even smarter than the God they profess doesn’t exist. They come up with all kinds of brilliant ideas about how man got here without a God to create them. Even after they see evidence that proves them wrong. They continue to push their point of view to reach a predetermined goal! They victimize the weak and use them to pull down the whole country! The following scripture will tell you where we are on Gods timeline!

(3) Let no man deceive you by any means: for that day shall not come, except there come a falling away first, and that man of sin be revealed, the son of perdition;

Most churches in America are not only falling away but are deliberately avoiding teaching what God has had in the Bible for thousands of years. The Bible tells us clearly what God wants the church to convey to the people! Prophecy is a good example. How can some not be deceived if they weren’t told of the predictions God made well in advance of an oncoming event?

(27) For I have not shunned to declare unto you all the counsel of God.

(15) And he said unto them, Go ye into all the world, and preach the gospel to every creature.

But we don’t have to travel far from our front door to find the lost! Some just ordinary people like you and me. Some very prominent like the Clinton’s who we know are lost and destined for hell! Yet some would be pastors go to the pulpit and refuse to do exactly what the word instructs a pastor to do.

Prophecy is in the Bible to make sure that every person knows what is coming. Not only that, it is so no one will be surprised when they see the events unfolding before them!

(1) Now the word of the LORD came unto Jonah the son of Amittai, saying,

(2) Arise, go to Nineveh, that great city, and cry against it; for their wickedness is come up before me.

What happened to Jonah when he decided that he didn’t want to give the words of God to the people of Nineveh? If you believe this story is untrue then you are playing with fire.

(16) For God so loved the world, that he gave his only begotten Son, that whosoever believeth in him should not perish, but have everlasting life.

Jesus Christ the Lord God, born of a virgin, gave His lift for every person who has ever lived. All you need to do to inherit everlasting life is to accept the pardon for your sin. The pardon He purchased with His precious blood. Turn away from your sinful ways and you will rule and reign forever with Him!

(14) And the Word was made flesh, and dwelt among us, (and we beheld his glory, the glory as of the only begotten of the Father,) full of grace and truth.

Yes God himself, the creator of all things, became flesh and suffered a painful death for you! He loved all of His creation so much that He was willing to pay the sin debt of every person to ever live. Those who go to hell did not have to go to hell. But pride and greed would not allow them to do the simple act of humbling themselves and accepting the person who loved them the most in all the earth!

Today is the day and this is the time to get ready for what will soon be in the news of the day! The evil are at work and have been for hundreds of years. It is too late to prepare for things that will surprise you. The deceptions coming down the road will fool the uninformed!

(22) For false Christs and false prophets shall rise, and shall shew signs and wonders, to seduce, if it were possible, even the elect.