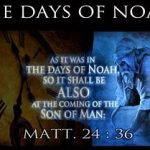 The hour is late, you don’t have plenty of time to settle your eternal destiny! There is a point in time when God will no longer allow the evil that men do to each other. Just as, (in the days of Noah), God will say “enough”. At a predetermined date in time God will end the violence and lawlessness that we see rampant in our world. Please remember He created all things and it all belongs to Him. Therefore, just as in the days of Noah, He has the right and the duty to stop anything He chooses to stop! 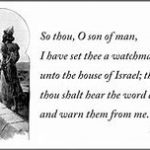 If you don’t believe in the Bible and are incorrect, it will cost you a terrible price to have made that decision. Maybe you might want to rethink the basis on which you came to that conclusion! But I tell you for a certainty you don’t have long to escape the trap you have set for yourself and your family.

If you are in a church with a pastor who chooses not to teach bible prophecy. You are on the deck of the titanic! God put prophecy in His word so you and I would have no excuse for not knowing Him and what He has planned for mankind. Certainly He will hold accountable Pastors and other Christians for not proclaiming the whole counsel of His word! God has made it clear that a Christian has a job to do while here on earth. Paul made it known that it was important to do that in the following scriptures.

(27) For I have not shunned to declare unto you all the counsel of God.

If we know and don’t warn those who may not know of the peril that awaits just around the corner!

(17) Son of man, I have made thee a watchman unto the house of Israel: therefore hear the word at my mouth, and give them warning from me.

(18) When I say unto the wicked, Thou shalt surely die; and thou givest him not warning, nor speakest to warn the wicked from his wicked way, to save his life; the same wicked man shall die in his iniquity; but his blood will I require at thine hand.

(19) Yet if thou warn the wicked, and he turn not from his wickedness, nor from his wicked way, he shall die in his iniquity; but thou hast delivered thy soul.

(20) Again, When a righteous man doth turn from his righteousness, and commit iniquity, and I lay a stumblingblock before him, he shall die: because thou hast not given him warning, he shall die in his sin, and his righteousness which he hath done shall not be remembered; but his blood will I require at thine hand.

(21) Nevertheless if thou warn the righteous man, that the righteous sin not, and he doth not sin, he shall surely live, because he is warned; also thou hast delivered thy soul.

The book of Revelation makes it very clear that God intends to complete what He started in the Garden of Eden. He plans to live here on earth with his children. That was His intent from the very beginning and it has never changed! He will live here after the end of the church age. The church age is now and will come to an end with the Battle of Armageddon. Armageddon ends the seven year great tribulation and ushers in the reign of Jesus Christ, who is God!

For those who are foolish enough to believe they can change the will of God. They will be sorry for the choices they have made. That sorrow will be eternal with no way to change what they could change now. By humbling themselves and turning to the God who loves them but not their sin! But there will be a point at which God will end his policy of allowing the evil among us to commit evil against Him and His followers!

(3) For even Christ pleased not himself; but, as it is written, The reproaches of them that reproached thee fell on me.

(4) For whatsoever things were written aforetime were written for our learning, that we through patience and comfort of the scriptures might have hope.

So God has given us His word to cause us to be informed of what He expects of each of us. But at an appointed time He will hold each of us accountable for the things we do while in this body. Then just as He did in the days of Noah, He closes the door.

(13) In the selfsame day entered Noah, and Shem, and Ham, and Japheth, the sons of Noah, and Noah’s wife, and the three wives of his sons with them, into the ark;

(15) And they went in unto Noah into the ark, two and two of all flesh, wherein is the breath of life.

(16) And they that went in, went in male and female of all flesh, as God had commanded him: and the LORD shut him in.

(17) And the flood was forty days upon the earth; and the waters increased, and bare up the ark, and it was lift up above the earth.

(18) And the waters prevailed, and were increased greatly upon the earth; and the ark went upon the face of the waters.

(19) And the waters prevailed exceedingly upon the earth; and all the high hills, that were under the whole heaven, were covered.

(20) Fifteen cubits upward did the waters prevail; and the mountains were covered.

(22) All in whose nostrils was the breath of life, of all that was in the dry land, died.

(23) And every living substance was destroyed which was upon the face of the ground, both man, and cattle, and the creeping things, and the fowl of the heaven; and they were destroyed from the earth: and Noah only remained alive, and they that were with him in the ark. 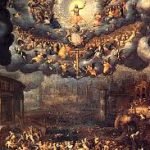 The wise and prudent will prepare today for what may happen at any moment. The hour of decision is now and the decision for each of us is in our own hands. God sends no one to hell, we do it ourselves. How will you answer your children and your friends. Standing at the judgment seat of God they ask of you, “why did you lie to me”! No one needs to appear at the Great White Throne Judgment”. But the decision to appear or not. It all happens here in this life and we make the decision ourselves!