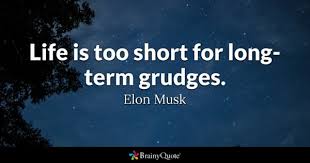 If we lament about the shortness of our natural life. Shouldn’t we take a serious look at the possibility that life itself may not be short at all? If we have studied, not just read, the word of God. We will see that the prophets of old had a much different view of life than our society has now. Our society lives for today and the things we are told is most important. Maybe we should look at those who make an over educated opinion about what is important. Most of the people that come out of our education system have a lot of opinions based on a view that excludes God. They discount anything that puts limits on what they want to do. Believing that the existence of God is not relevant to them and their plans for their lives! However when they finally get to a point where they finally think there may actually be a God. They have passed the point of actually changing their final destination!

If you believe life is too short, check out these scriptures and understand what they tell you.

(27) And as it is appointed unto men once to die, but after this the judgment:

This scripture tells us that there is life after the death of the body. If we spend all our time in this life amassing things for our so called golden years. Do nothing to prepare for life itself, we shall find judgment to go very ad for us. But you say, I don’t believe in the God stuff, suppose you are wrong! When you get to judgment, you can change nothing. Oh we I just don’t believe it. I will assure you that you not believing will not change one iota of what your future will hold! Would not a prudent person prepare as much for the rest of eternity as they did for the golden years? Not believing in God does not make it so! On the outside chance that it may be truth, wouldn’t a rational person investigate this possibility? If Hebrew 9: 27 is true, then Ezekiel 18: 20 thru 24 might be a little concerning to us.

(21) But if the wicked will turn from all his sins that he hath committed, and keep all my statutes, and do that which is lawful and right, he shall surely live, he shall not die.

(22) All his transgressions that he hath committed, they shall not be mentioned unto him: in his righteousness that he hath done he shall live.

(23) Have I any pleasure at all that the wicked should die? saith the Lord GOD: and not that he should return from his ways, and live?

The Bible says that “God so loved the world”, that means everybody! But the same Bible says that since God has made a way of escape, it is incumbent upon a wise person to accept the pardon God has provided! So when we say, “the God I believe in would not send anyone to an eternal hell.” Remember this, heaven would not be heaven if all went there, some are the reason we live in a form of hell here on earth. But the hell that is spoken of in the Bible, is for all who reject the God who dwelt among men and was murdered by men!

(13) There hath no temptation taken you but such as is common to man: but God is faithful, who will not suffer you to be tempted above that ye are able; but will with the temptation also make a way to escape, that ye may be able to bear it.

There is no doubt in my mind that there are people whose goal in life is to prove that they don’t have to obey God about anything. But only the very foolish are stupid enough to be willing to go to hell attempting to prove it!